From custody to support, visitation issues and more, Brooklyn family law attorney Robert Gershon can fight for your rights.
Call Rob Gershon at (718) 625-3977

Accused of a crime? You need an experienced Brooklyn criminal defense lawyer on your side. Call former Brooklyn Assistant District Attorney Robert Gershon.

As an experienced Brooklyn divorce lawyer, Mr. Gershon understands what it takes to represent you with dignity and respect, seeking the outcome you desire.

With more than 25 years of legal experience, Robert Gershon, Esq. can represent you in legal matters including family law, matrimonial law and criminal law.

A former Brooklyn Assistant District Attorney, current member of the Judiciary Committee of the Brooklyn Bar Association and Past President of the Kings County Criminal Bar Association, Mr. Gershon has the experience, credibility and knowledge to represent you strongly, professionally and ethically.

If you have been charged with a crime, your freedom and livelihood may be at stake.  A criminal conviction can carry jail time, probation or even deportation if you are not a U.S. citizen. A conviction also tarnishes your reputation and can impact your ability to find work in the future. The impact may last your lifetime.

Experienced Brooklyn criminal defense lawyer Robert Gershon will work to prepare a strong defense. He will fight the prosecutor's case against you, working to defeat the State’s efforts to prove your guilt beyond a reasonable doubt and punish you.

Robert S. Gershon, Esq. is a compassionate and experienced Brooklyn family court lawyer who will fight for you in your custody, visitation, support and order of protection matters. Some cases may be resolved amicably, while others may need to proceed to trial. Whatever your situation is, you need a seasoned family law attorney to help you through the legal issues related to your case.

If your marriage is coming to an end, you need an experienced New York matrimonial attorney on your side.  Robert Gershon, a Brooklyn divorce lawyer with more than 25 years legal experience, can help you reach the outcome you seek.

Your case may involve child custody and visitation issues, support concerns and division of marital assets. Sometimes, allegations of domestic violence may need to be addressed.  Divorces are often contentious, involving court appearances and depositions. Others may be uncontested, where the parties to the marriage do not have to appear in court.  Whatever your situation, you need representation from someone who knows what they’re doing.

Contact Robert Gershon, a Brooklyn divorce attorney who is ready to protect your interests.

Facing a criminal charge is difficult for anyone. Being charged with domestic violence, however, may be particularly difficult. Often there may be collateral consequences to a court order of protection such as prevented access to your children and home. There can also be social stigmas and exposure to criminal penalties.

These matters must be taken extremely seriously. Brooklyn attorney Robert Gershon has over twenty five years of experience handling these cases in the Kings County Criminal and Family Courts.

Parents have the right to see and spend quality time with their children in New York. Often, parents will enter into a mutually agreed upon written child visitation agreement. Other times the court will decide on a child visitation schedule.

There are many factors that go into child visitation arrangements. Visitation rights are governed by complex rules. It goes without saying that you should be represented by an experienced Brooklyn family lawyer who understands what is in the best interest of children and has extensive experience navigating New York custody and visitation laws.

What Our Past Clients About Our Firm

Our clients speak for us. Learn how we can help you with your legal matter.

He’s been my defense attorney twice over the past 3 years and he has properly represented me in both cases. Now I don’t go into any legal situation without seeking his input first! – SS

I hired Rob on a recommendation from a friend to handle my custody case which was being handled initially by a different attorney. Making the switch was a wonderful decision. Rob was very thorough, honest and dedicated to ensuring the matter was handled professionally as well as empathetically. I felt extremely comfortable with him. I would highly recommend his services to anyone in search of an attorney to assist with their family court matters. Thank you Rob for a job well done! – TV

I was referred to Robert office by two relatives of mine when circumstances once again turned negative, and he and his staff were both amicable, and VERY knowledgeable… They took my hundreds of pages of ten years of reports and documents, and turned it into an amazing stipulation that had my son and my best interest front and center. Mr Robert was nothing but honest and forthright and it was much appreciated, I was left with no false hopes or expectations. – SK

Robert clearly laid out a plan that helped me through this difficult and unexpected divorce. I was able to be in a situation where I could keep my home which was all I had left at this late stage of my life. He was patient and tolerant. His experience was exhibited in his clear understanding of the law and the courts. – MO

I’m not normally a writer of reviews, but Rob deserves to have some extra stars here after representing me in my support case. The economics of hiring a lawyer in family court just don’t make sense unless you find someone like Rob who gets results at a very small fraction of the cost of high end lawyers… I will be seeking his representation for any of my future family court needs. – AC

Mr. Gershon was excellent! He came through with everything he promised. Made a very disturbing experience for me rather easy once he stepped in. He was extremely compassionate, professional and patient and handled my case expertly. I am very grateful for his assistance and would highly recommend him… an excellent lawyer!

One of the best lawyers I met… put your investment on Mr. Gershon, he is worth the money and freedom. Thank you a million Mr. Gershon. -DF

Mr. Gershon was a blessing to our family. He knows the ins and out of the criminal justice system and handled my husbands case with ease. We will be forever grateful for his help. -CF 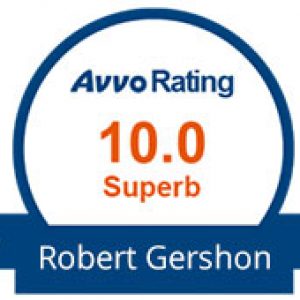 I am a solo practitioner with offices in downtown Brooklyn, New York. The areas of my practice are family law, divorce law, and criminal defense.

University of Massachusetts at Amherst, B.A. 1989